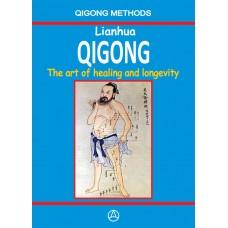 Отзывов: 0  |  Написать отзыв
Описание Отзывы (0) Похожие товары (4)
Lianhua Qigong
The art of healing and longevity
author: I. Dudukchan
language: English
Qigong – it is an art of management of the specific energetic substance Qi. Its history totals several thousand years. Having generated at the earliest stage of human civilization in China, this system developed under the strong influence of the different religious philosophies: Taoism, Buddhism and Confucianism.
The further development of Qigong led it to the division in several directions: Medical Qigong, Mystic Qigong, Military Qigong.
Medical Qigong – it is an art of health straightening, prevention and treatment of diseases that impedes premature ageing and favors prolongation of the life.
It is thought in Chinese medicine, that the root of any disease is a disorder of Qi circulation. When in the channel of any organ, exceed or lack of Qi takes place, that is predominance of Yang or Yin, this organ is injured. If Qi circulation is not balanced in it in proper time it begins to function with stoppages that will result in the disease. That is why the most optimal treatment method is the quickest restoration of the normal circulation of Qi energy in the human body before the appearance of physiological problems.
Many masters elaborated the own exercises, forms and methods of Qigong, directed of health strengthening and diseases treatment.
Lianhua Qigong is one of the most effective styles of soft qigong. It was created by Wei Lingyi and Long Lei and many other. The dynamic and static forms of Lianhua Qigong  are presented in this book.
Paperback, 66 pages
You can get Epub version of this book on Google Play

Dantian Qigong - The Art of the Qi Accumulation and Distribution
$6.00
Купить

Wingchun Qigong The Art of the Qi Management
$8.00
Купить