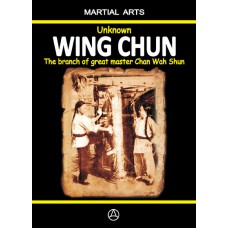 Отзывов: 0  |  Написать отзыв
Описание Отзывы (0) Похожие товары (3)
Unknown Wing Chun
The branch of great master Chan Wah Chun
author: I. Dudukchan
language: English
Wing Chun it is a best known and dynamically developed throughout the world Wushu style. Its distinctive features are easiness and economy of movements, softness and compliance and also effectiveness of defenses and power of attacks. The main aim of this direction of Chinese martial arts is a most fast victory in combat with the least expense of forces and energy.
The offered book is devoted to the survey of Wing Chun Kuen technique, given us by the Great master Chan Wah Shun and his son Chan Yu Min.
Its special feature is a harmonic combination of traditional Wing Chun Kuen holds with rigid and powerful technique of Southern Shaolin Wushu. In this style besides the widespread forms such as Siu Lim Tao, Chum Kiu, Biu Jee are many new and little known forms such as “Four gates”– Saay Moon, “To Conquer tiger” – Fuk-fu Kuen, “Red sand hand” - Hung Sha Cheung and other.
The book contains large number of illustration and will be useful for everybody, who studies the martial arts.
Paperback, 248 pages
You can get Epub version of this book on Google Play